The Odoo is nice – they said and gave us certificate

On the Solar Decathlon Europe we gained 3 out of contest awards (see the final results) and 2 of them praises the beauty of smart house: one for lighting and one for the interior design. The topic is subjective, but this is logic and concepts. 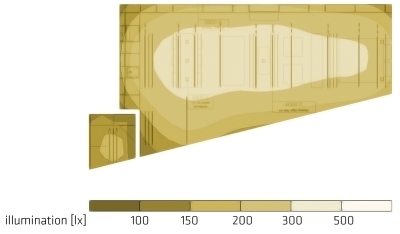 The lighting is also reflected in the energy efficiency is anything but no matter how much you consume, and how efficiently it is used, and in general it looks like, what kind of visual concept we see when the house is illuminated. How to show the spaces, which give the contour shapes, lights and how targeted to where you want to be able to give you the feeling that you just expect. Principle design of the lighting was that we set different lighting levels to a base and by this numerous combinations of lighting schemes we can get according to different needs and activities. Technologically, a LED lighting is chosen, because of its longlife (20-35,000 hours), also, needs fewer replacement and consumes less power and produces less heat then a bulb, so this is the key to the future. The remaining question is: what, where, how to install them…. 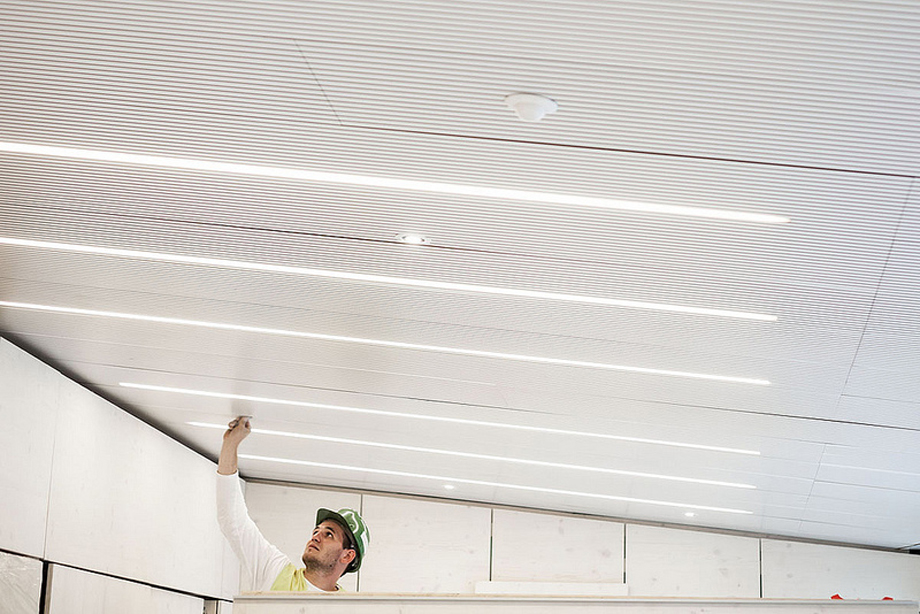 Into the suspended ceiling two light sources were installed: first, a general, the other, targeted specifically to a single functional area illuminating spaces such as the dining table, coffee table, the bedroom part of the desk, kitchen, outdoor kitchen, outdoor relaxation area. Into built-in cabinets we installed ambient lights. The general illumination provided by 27 meters of LED strips, which are built at an angle of 120 degrees, so there is hardly any shadows, reduce contrasts, and provides an even, diffused, colder light around 250-300 Lux. The spotlights directly draws the attention to the highlighted areas by a warmer light, we highlight the table and the bed area, by giving them more intimate lighting. The LED lights were installed also in the functional units, which although not as powerful as a traditional bulb lighting, LED prevalent today than they produce a superior. The lighting may be controled not only manually, but by automation via smartphone, tablet…

Interior design
The contrast of the furnishing, e.g the elements that are built into the walls melt in there completely and ‘independent’ pieces of furniture are to define the border of the interior space. The north wall is for the storage: full width built-in wardrobes and shelves covered with sliding doors. The wood-paneled walls and cupboards are painted with a  slightly translucent white paint so the wood grain nicely fade through. The visual presence of the timber feels more cozy and draws a warmer atmosphere than a neutral, homogeneous white wall, however, the raw wood paneling is a bit unusual for the ‘Hungarian eyes’, so we tried to seek balance on this issue. The wall’s – and thus the whole interior’s – the image is determined ob the act which doors we leave open and which one should be closed, according to this you can receive a complete, homogeneous surfaces, shelves, cabinets or a combination you want. The kitchen is based on the same principle, the dishwasher and washing machine and the fridge is hidden behind the same wooden doors – from the outside you can not tell where are the major household appliances. 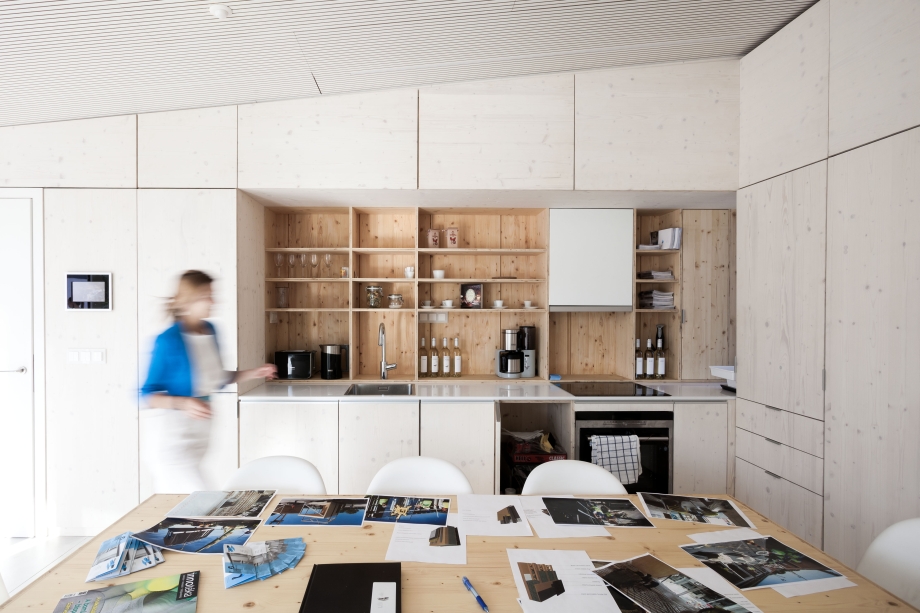 With mobile furnitures we can furnish the home in a flexible way, again, depending on exactly what we need. We organize an event with a lot of visitors? Take out the chairs, armchairs and table to the terrace to the relaxation area. Want to watch movies? Everything else can be pushed aside, and the chairs in front of the screen! Many people want to work at the same time? It should be done at your desk cards, and three of them can sit round immediately. One of the most spectacular attraction was the presentation of specific PAQ chair: the zippable chair mattress was admired by everyone, and the vertically sliding cover plate which hides the monitors also took a place in the list of the presentable tricks of the house. Our house was a playground is ready for the public. :) 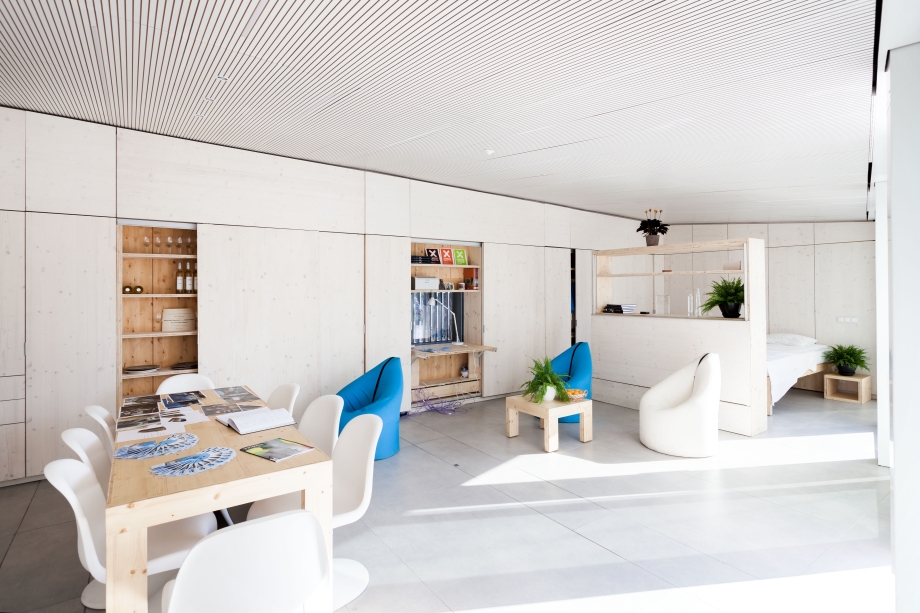 First we imagined a white floor adapting to the tones of the entire interior, but finally we chose a pale gray cermic, as the color is less or even not at all dazzling the eyes, the material is suitable for storing passive heat gain entering through the doors record.
The suspended ceiling was not only a question of design: we decided the ceiling has a main role in tempering the interior, as its surface is a transport surface of the semi-passive cooling-heating system installed inside it, also we sought acoustically beneficial solution. The MDF-built ceiling scored on both counts of tests: the cooling noticeably operated well, and the improvised concert of the madrileña Hungarian violinist Andrea Szamek sounded pretty well among the walls – and she didn’t burden the strings. 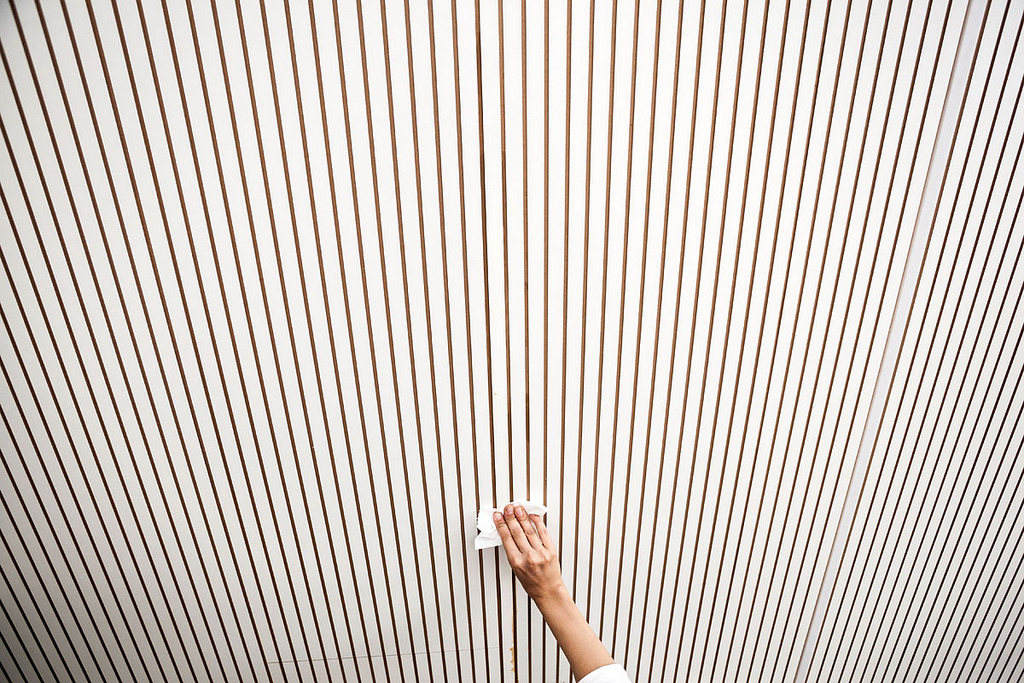 Because of the warm weather, the terrace was one of the most intensively used area during the two weeks of the competition in two. It actually felt like just inside the house: the same gray ceramic floor, the summer wall’s appareance is the same as the cabinets’ inside and the glazed sliding doors ensure transparency, connecting the outside and inside areas. The mobile furnitures are also present: the chairs, tables constantly moved depending on the usage of the paq chairs.. If someone wanted a bit of privacy, because wanted to have a nap, just pulled the sliding door of the relaxing area and fell asleep on an ‘unwrapped’ a mattress of the paq chair. In the kitchen of the summer wall about 30 scrambled eggs were cooked in two weeks.

The jury evaluated the pureness and integrity reflected on the whole house, deliberate material use, beautiful construction. And as we tested it we must state: we used it, in fact, with joy, it works and functions well and perhaps there is no better feeling when a we can live in a beautiful and well-functioning environment. 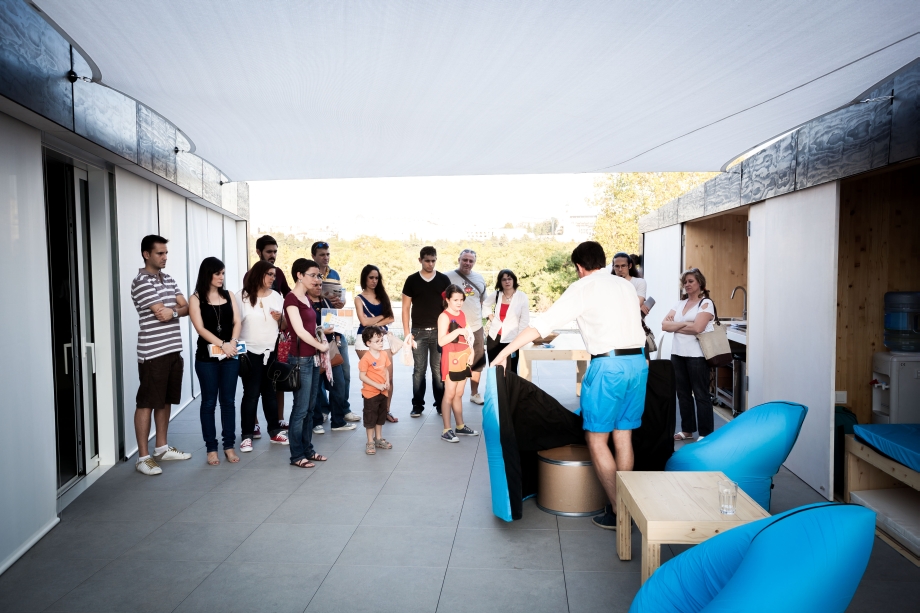